So I do like a good burger. A while back (pretty sure it may have been memorial day weekend) I posted my review of Red Mill Burger which was spot #2 in my Man vs Food Trilogy. But I had been chatting with one of my friends over here Daniel who swore black and blue the best burgers were at Red Robin. I really wasn’t sure, because to be honest I have had some good burgers in my life. I had flown down to LAX just for a Burger in July (funnily enough… that may happen again soon 😉 ) and have always enjoyed In n Out. But I don’t usually like fast food burgers to much, I like me a good burger that’s been made well.

Sure the burger can come from a semi fast food place like Red Mill, but i don’t count that as true “Fast Food” cause sure as hell it wasn’t fast. I waited in line longer than it took for me to eat the burger. That to me is not a sign of fast food but GOOD food. A Place that puts effort into its food. So Daniel had made a big call saying that the Burgers were good. I was determined to make him prove it. So without much on the plans for the weekend, and both of us free Saturday night. We decided to hit up Red Robin.

The weather was pretty damn good yesterday (1 day of rain in almost 2 months can NOT be complained about), it wasn’t to cold so I decided to walk to Red Robin as its about a mile away and enjoy the evening as the Sun set. That way i wouldnt feel as guilty. The sun sure didn’t dissapoint. 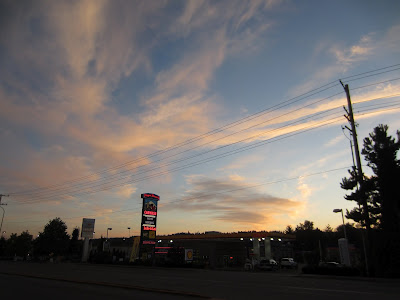 By the time we got to Red Robin it was pretty packed. I was there first so got our name on the list and few minutes later Daniel joined me and while we waited the sun finished setting off Brilliantly. 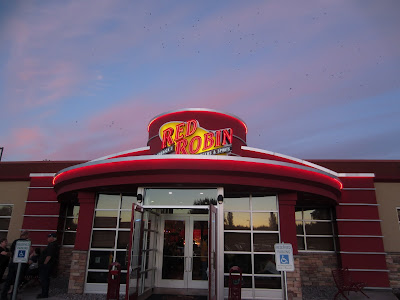 We moved inside as it was getting close to the end of our “expected wait” of about 10 minutes and the place was still pumping. This suprised Daniel a bit as he expected it to be a bit slower. I had no expectations but if this is a normal Saturday night… damn he must be right. They had the college football game on some of the screens around and even on the TV sets in the floor! It felt more like a Bar mixed with a Diner. Booths and Tables, a bar area off to one side. It looked pretty good to be honest. By the time we got our table we had to wait a bit, the service wasn’t the best overall but to be honest, I’ve had worse in Australia. It wasn’t the worst I have had over here, but it wasn’t good to start. 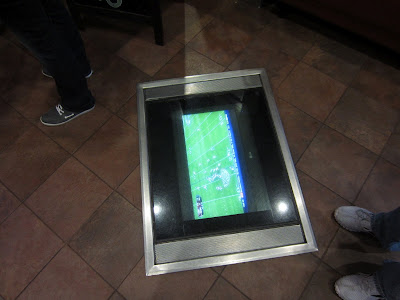 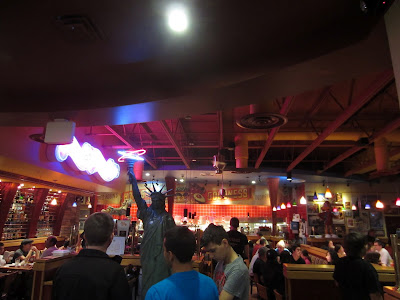 I didn’t even chose what Burger i wanted from the menu, Daniel told me that I had to try the “Royal Robin” as it was exactly what he had his first time there. I was up for whatever so I took his advice. The kitchen was pumping out the goods but it didn’t look sloppy or anything like that. The food all looked good. We got our burgers ordered and a side of “Towering Onion Rings” and i was told to be impressed. The menu was pretty good, plenty of burgers (obviously) but also a good selection of salads and other items and plenty of stuff for the kids. The Milkshakes looked good, but a bit to big for me. All the burgers came with Bottomless Steak Fries (to be honest my favourite kind of fry) and the thought of Bottomless Rootbeer Floats sounded good till I saw how big they were and then had 2nd thoughts.

First up was our Onion Rings. 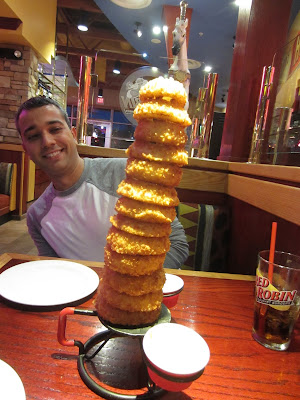 Now the onion rings were good, don’t get me wrong. They were definately not on the same scale of goodness that the Red Mill Burger onion rings were, but they were definately better than the generic frozen ones they serve at Hungry Jacks/Burger King or most places. So that was a win. It came with two sauces, Ranch Dressing & Campfire Sauce, of which I preffered the Camp Fire Sauce. It was slightly smokey and went well with the Onion rings. But then the goodness arrived. 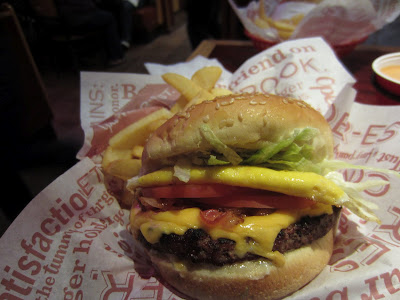 The Royal Robin is described on their menu as:

This is the aristocrat of all burgers because we crown it with a fresh fried egg. It’s topped with hardwood-smoked bacon, American cheese, crisp lettuce, fresh tomatoes and mayo.

And it looked good. It looked fresh & Tasty and not at all fast foodish as I expected considering they are a chain restaurant. So definately winning out here. After a few bites I was sold. The burger was damn good. Now is it the “best” burger in Seattle. I don’t know. But is it the “best” burger I have ever eaten…. Dunno on that call either. Is it the best burger I’ve had lately… yeah. We were discussing the merits of Burgers and decided although In N Out are not that great, the LAX store is more about the location and atmosphere than the burger itself and it kind of has a bit of an advantage of Atmosphere. Red Mill has the better onion rings, but Red Robin had the winner of the 3 burgers in my opinion.

Plans were made for another burger outage next weekend and as we were both pretty full, Daniel made his way to his car to drive himself home, while I walked home to make me feel less guilty… Which i don’t at all.